Switch is a utility component that lets you switch between different states of an element on the canvas using animated transitions. It comes with an additional SwitchToStateAction component, which acts as a hotspot that can change the current state of a Switch without writing any code.

Interactive Switches can manage their own state. Use them when you need to have a Switch change its own state when it’s tapped / hovered over. Here are a few examples of components that are a good fit for an interactive Switch: 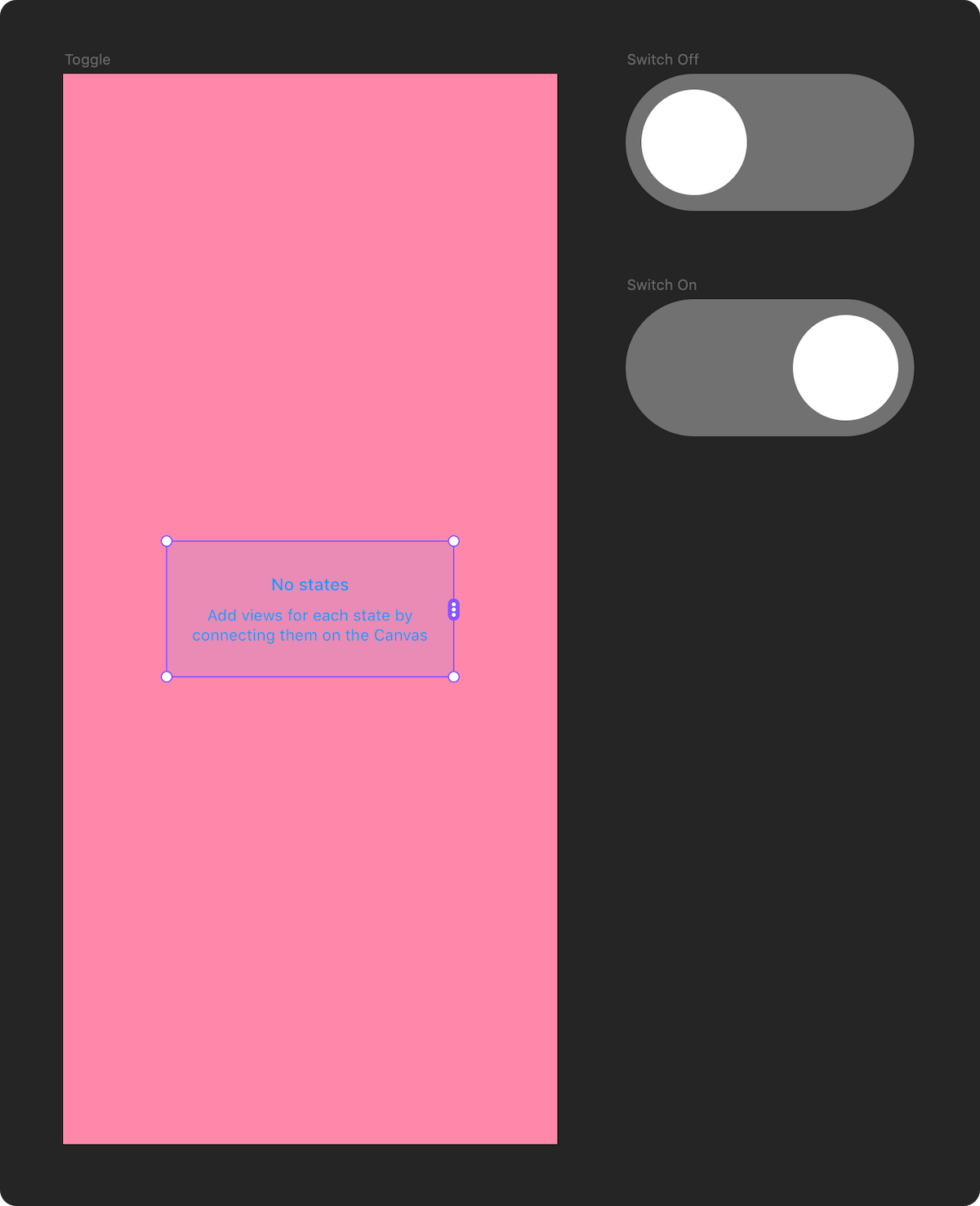 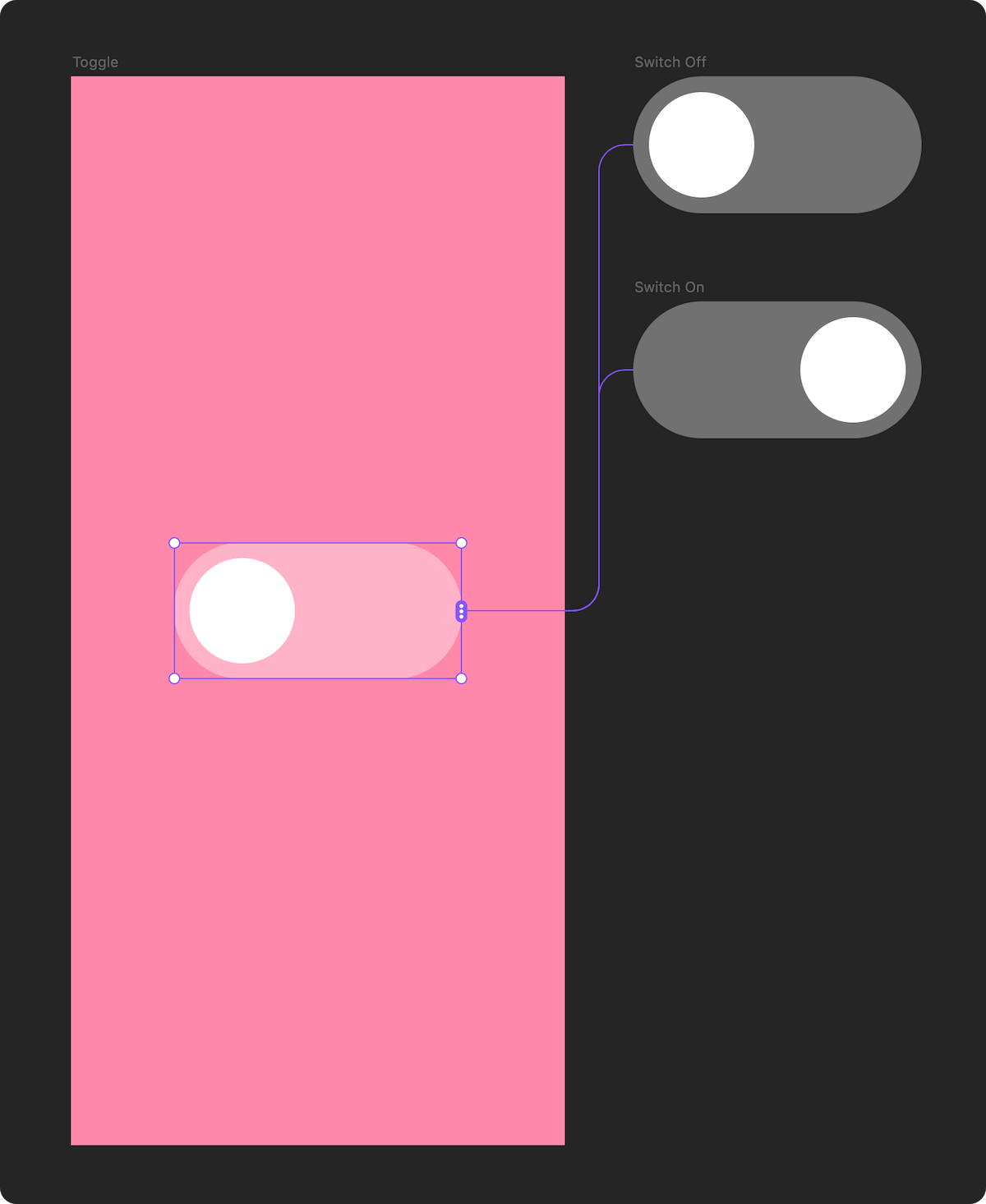 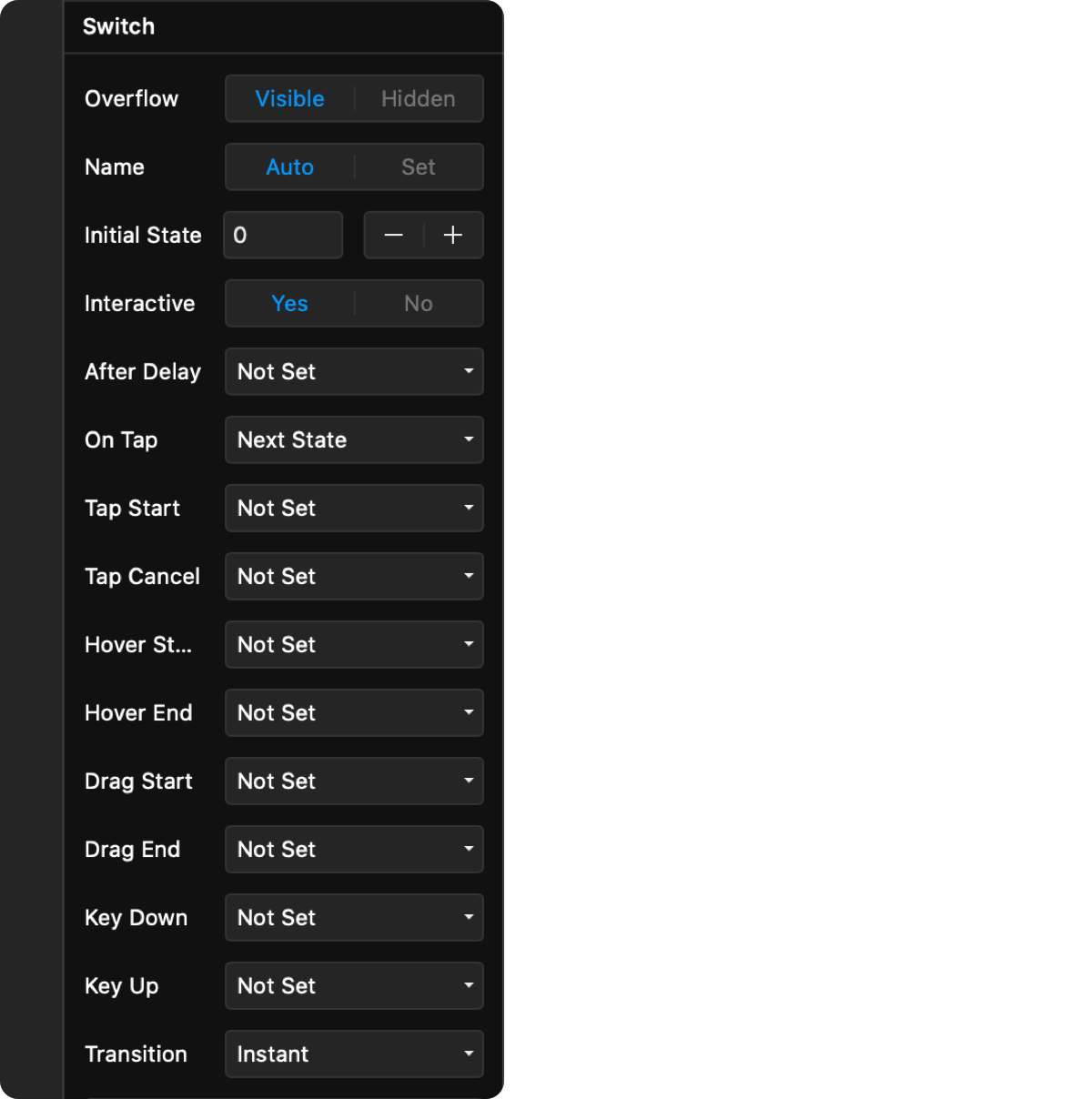 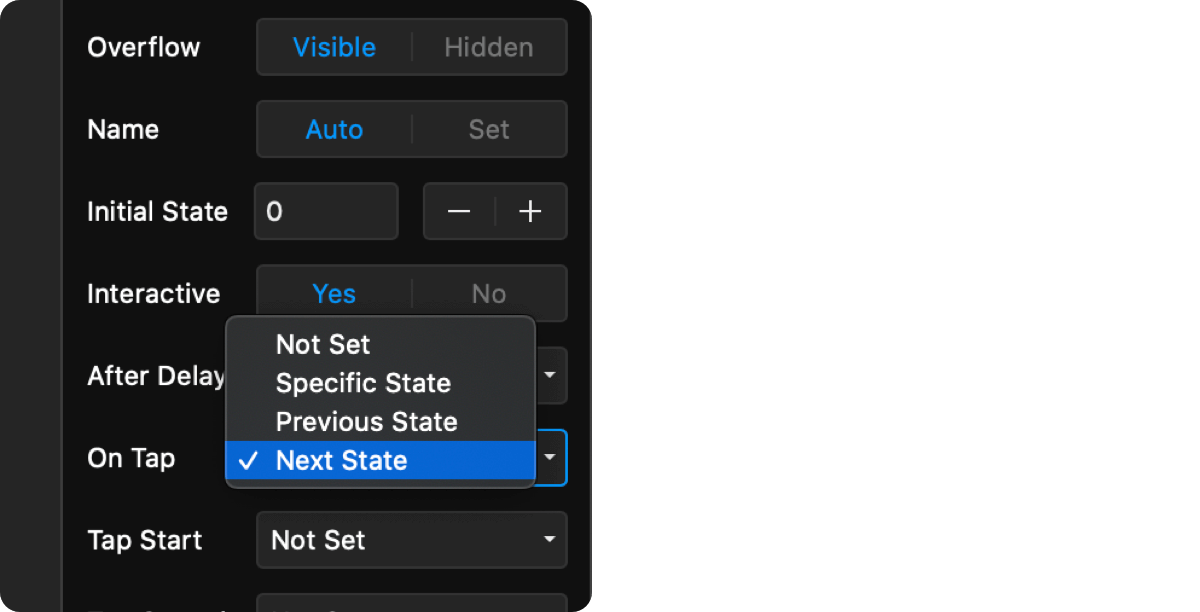 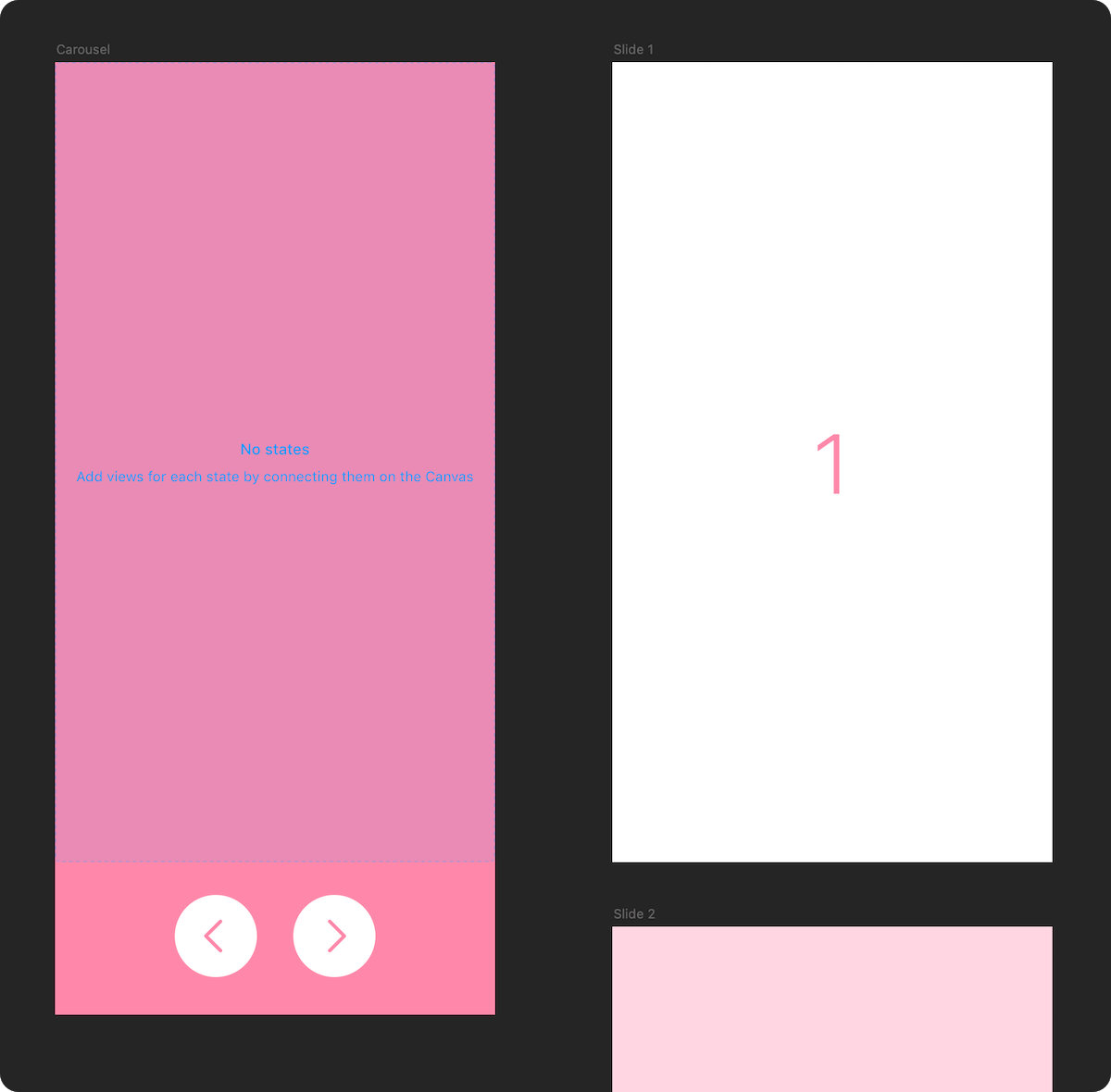 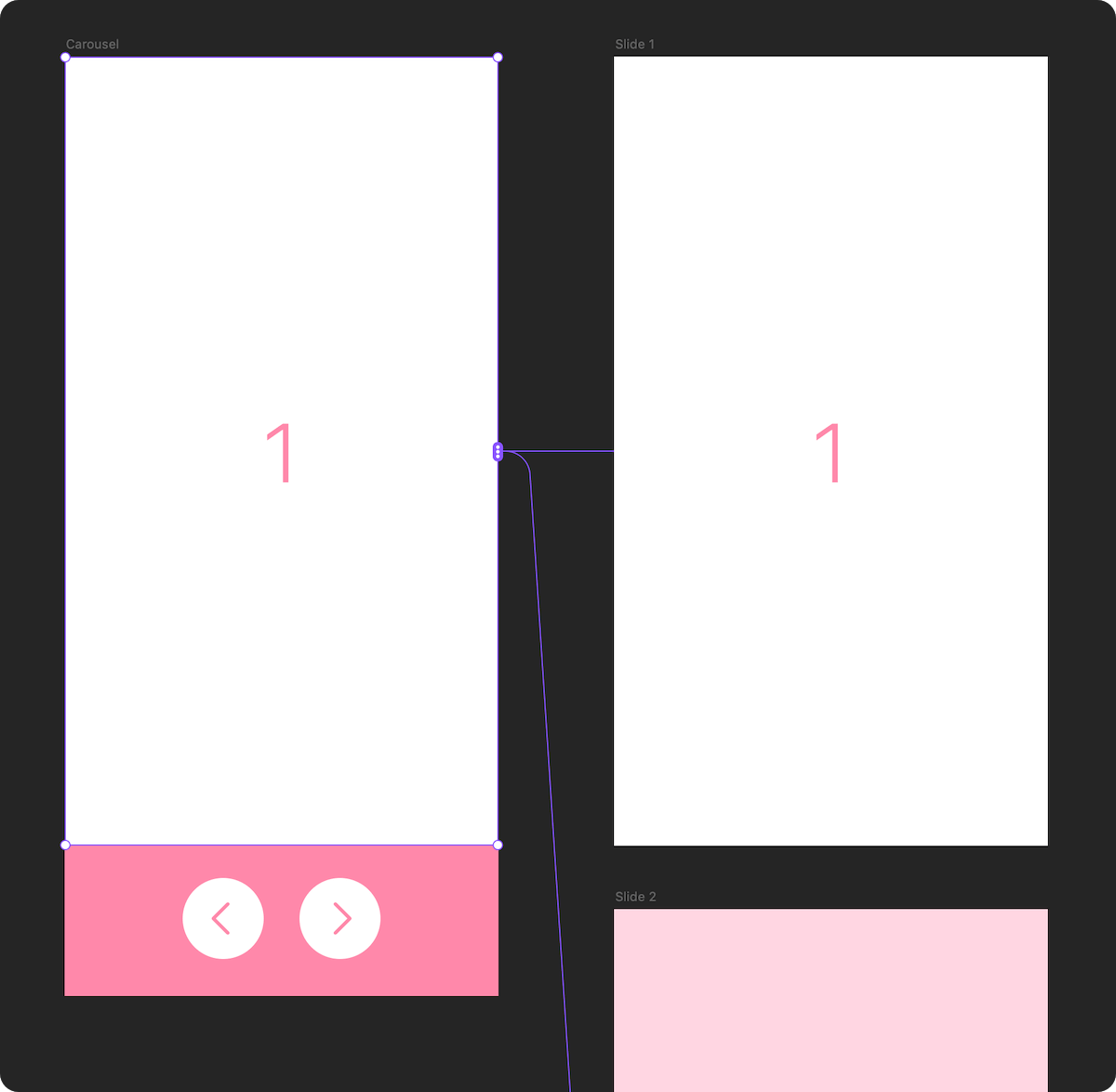 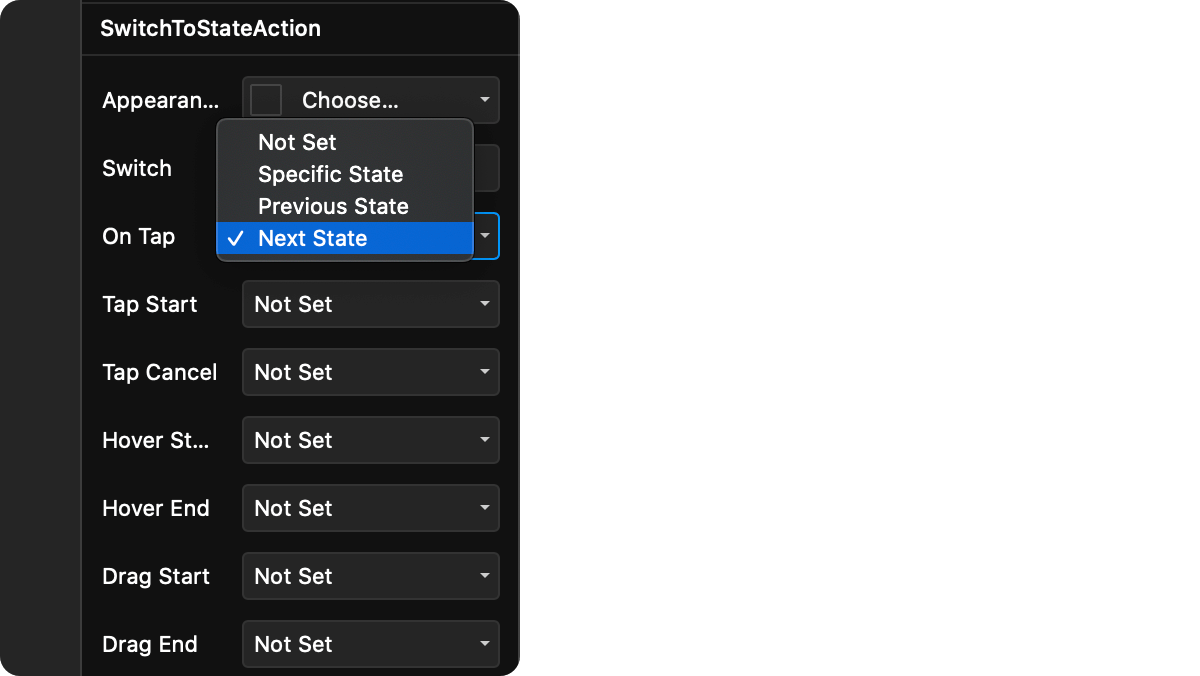 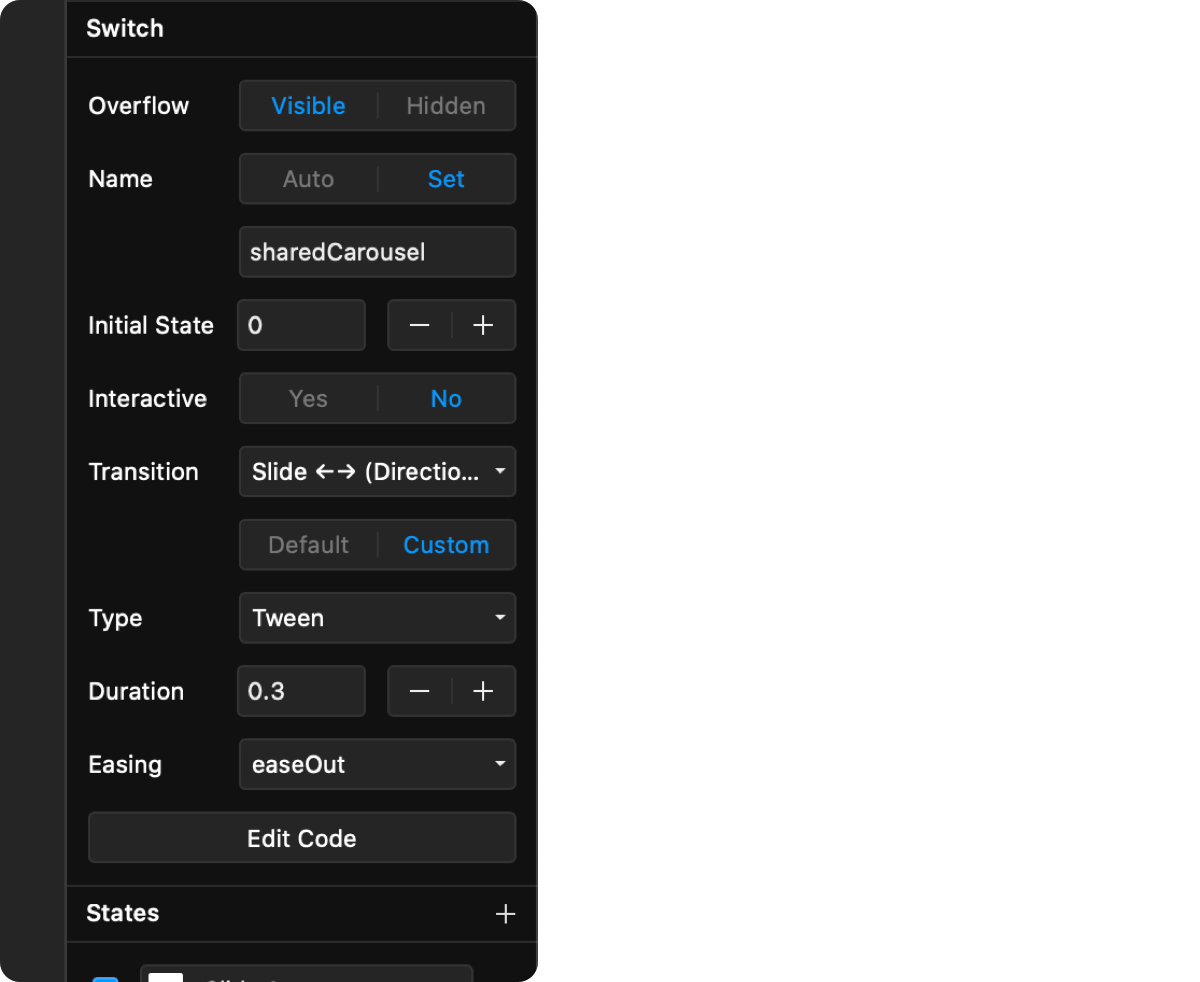 The “Auto-Animate” transition works differently from the other available state transitions. When triggered, elements shared between two states will animate their properties smoothly between each state. If there are elements in the next state that don’t exist in the current one, they’ll fade in, and elements that should no longer be shown will fade out.

Before an auto-animate transition begins, the Switch component looks for matching elements between the current and the next state. To figure out if an element matches another element, it looks at:

Note: Names of Graphic layers are currently not recognized properly. To transition between Graphic layers, wrap them in a Frame and name the Frame.

If an element is found to be matching another element, we’ll create an animated transition for the following properties:

If the two matching elements are of a different type (e.g. a transition between a Frame and a Graphic), or are of a type where a smooth transition isn’t possible (e.g. transitions between two Text layers), the two elements will be animated using a cross-dissolve.

Each group can have different transition timing. Morphing elements always use the timing options defined right below the “Transition” property when it’s set to “Auto-Animate”. The Enter and Exit transitions will have their own options right below (by default, they’re set to a 0.3s dissolve). 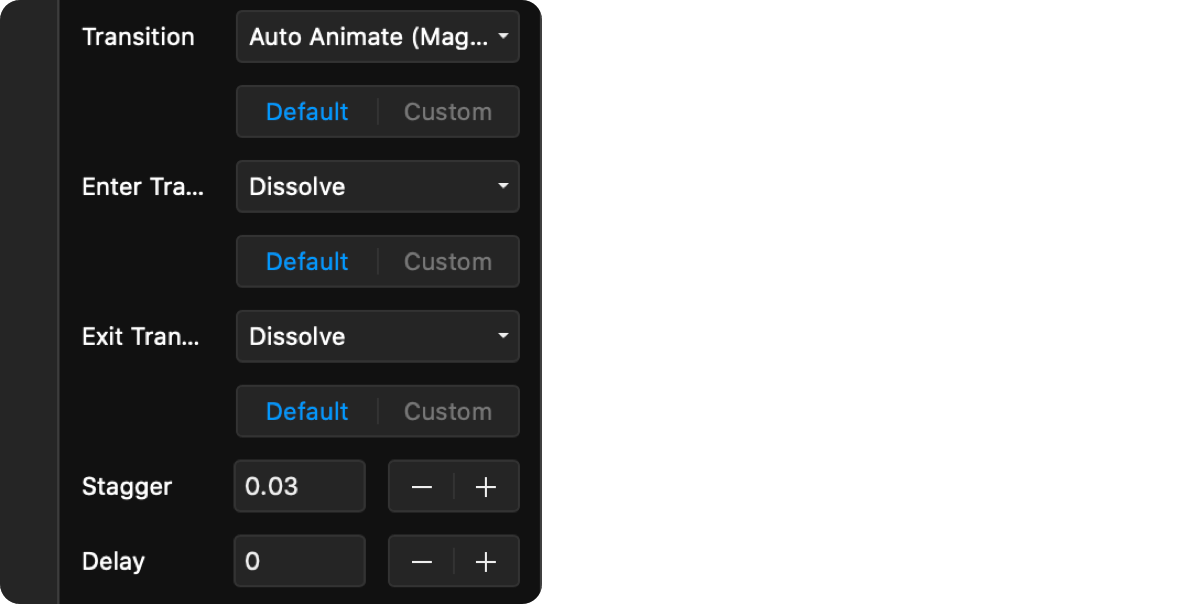 Since code components can render arbitrary HTML, it’s hard for Switch to figure out if content rendered by the code component should also be auto-animated. To get around this issue, whenever it encounters a Code Component, the Switch will only animate its position and size. It will then determine if any of the component’s props have changed between the different states, and if they have, it will pass the new props to the component.

Matching code components will not get unmounted and remounted between states, just passed new props. This is especially powerful with components that are expensive to fully re-render, like maps and videos.

If this behavior doesn’t match what you expect, you can set the morphCodeComponentPropsOnly prop on a Switch instance to false through an Override, and we’ll fall back to a cross-dissolve between the two states of the code component.

Use these in Overrides, or when you use the Switch component from code.

Controlling Switches with the useSwitch Hook

To control Switches from code, first import the useSwitch hook at the top of your file:

Then call the useSwitch() hook in your code component or override:

Note: you can only call this hook from inside a React component or override. Calling it from a different place in your code could result in unexpected behavior. Read more about the rules of hook usage.

The useSwitch hook will return a controls object with the following functions: